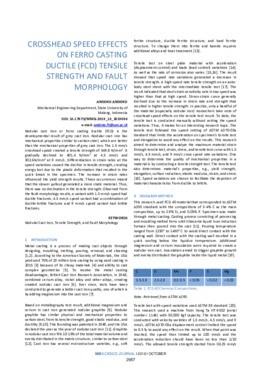 Nodular cast iron or Ferro casting ductile (FCD) is the developmental result of grey cast iron. Nodular cast iron has mechanical properties similar to carbon steel, which are better than the mechanical properties of grey cast iron. The 1.5 mm/s crosshead speed created a tensile strength of 549.8 N/mm2. It gradually declined to 401.4 N/mm2 at 4.5 mm/s and 302.6N/mm2 at 9 mm/s. Differentiation in strain rates at the speed variations caused the decline in tensile strength, creating energy lost due to the plastic deformation that resulted in the quick break in the specimen. The increase in strain rates influenced the yield strength results. These occurrences meant that the slower pullout generated a more static material. Thus, there was no declination in the tensile strength. Observed from the fault morphology results, a variant with 1.5 mm/s speed had ductile fractures, 4.5 mm/s speed variant had a combination of ductile-brittle fractures and 9 mm/s speed variant had brittle fractures.

APPLICATION OF DATA GLOVE FOR ASSEMBLY ANALYSIS OF SELECTED COMPONENT