CONTROL OF THE TECHNOLOGICAL PROCESS OF DRILLING 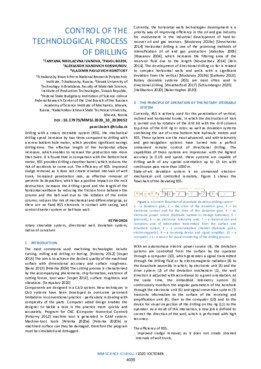 Drilling with a rotary steerable system (RSS), the mechanical drilling speed increases by two times compared to drilling with a screw bottom-hole motor, which provides significant savings drilling-time. The effective length of the horizontal elbow increases, which enables to increase the production rate more than twice. It is found that in comparison with the bottom hole motor, RSS provides drilling smoother barrel, which reduces the risk of accidents to come out. The efficiency of RSS: improved sludge removal, as it does not create strained intervals of well trunk; increased penetration rate, as effective removal of prevents its deposition, which has a positive impact on the rock destruction; increases the drilling speed and the length of the horizontal wellbore by reducing the friction force between the column and the hall wall due to the rotation of the entire column; reduces the risk of mechanical and differential grips, as there are no fixed RSS elements in contact with casing, well control diverter system or hall bore wall.