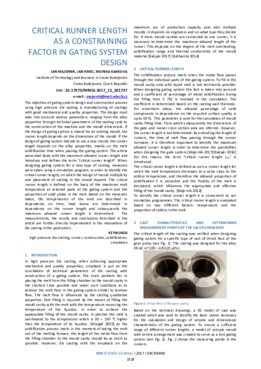 The objective of gating system design and construction process using high pressure die casting is manufacturing of castings with good mechanical and quality properties. The design must take into account various parameters, ranging from the alloy properties through technical parameters of the casting cycle to the construction of the machine and the mould dimensions. If the design of gating system is meant for an existing mould, the runner length depends on the dimensions of the mould. If the design of gating system intends to use a new mould, the runner length depends on the alloy properties, mainly on the melt solidification time when passing the gating system. The article presented deals with the maximum allowed runner length and introduce and defines the term “critical runner length”. When designing gating system for a new type of casting, measures were taken using a simulation program, in order to identify the critical runner length, on which the design of mould multiplicity and placement of casting in the mould depend. The critical runner length is defined on the basis of the maximum melt temperature at selected parts of the gating system and the proportion of solid phase in the melt. Based on the measures taken, the temperatures of the melt are described in dependence on time, heat losses are determined in dependence on the runner length and subsequently the maximum allowed runner length is determined.  The measurements, the results and conclusions described in the article are further directly implemented in the innovations of die casting in the production.