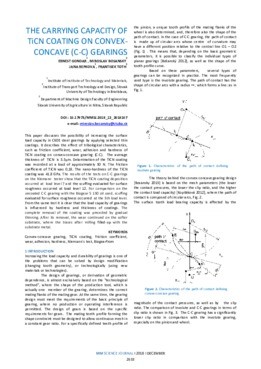 This paper discusses the possibility of increasing the surface load capacity in C60E steel gearings by applying selected thin coatings. It describes the effect of tribological characteristics, such as friction coefficient, wear, adhesion and hardness of  TiCN coating on convex-concave gearing (C-C).  The average thickness of  TiCN  is 3.3µm. Delamination of the TiCN coating was recorded at a load of approximately 50 N. The friction coefficient of TiCN was 0,18. The nano-hardness of the TiCN coating was 41.8 GPa. The results of the tests on C-C gearings on the Niemann  tester show that the TiCN coating deposition occurred at  load level 7 and the scuffing evaluated for surface roughness occurred at load level 12. For comparison on the uncoated C-C gearing with the Biogear S 150 oil used, scuffing evaluated for surface roughness occurred  at the 5th load level.  From the same test it is clear that the load capacity of gearings is influenced by hardness and thickness of coatings. The complete removal of the coating was preceded by gradual thinning. After its removal, the wear continued on the softer substrate, where the traces after milling filled-up with the substrate metal.