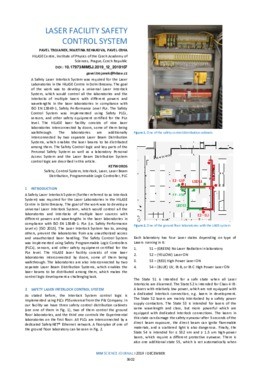 A Safety Laser Interlock System was required for the Laser Laboratories in the HiLASE Centre in Dolni Brezany. The goal of the work was to develop a universal Laser Interlock System, which would control all the laboratories and the interlocks of multiple lasers with different powers and wavelengths in the laser laboratories in compliance with ISO EN 13849-1, Safety Performance Level PLe. The Safety Control System was implemented using Safety PLCs, sensors, and other safety equipment certified for the PLe level. The HiLASE laser facility consists of nine laser laboratories interconnected by doors, some of them being walkthroughs. The laboratories are additionally interconnected by two separate Laser Beam Distribution Systems, which enables the laser beams to be distributed among them. The Safety Control logic and key parts of the Personal Safety System as well as a laboratory Personal Access System and the Laser Beam Distribution System control logic are described in this article.