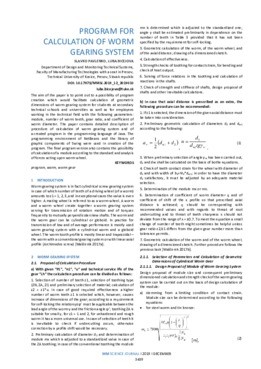 The aim of the paper is to point out to a possibility of program creation which would facilitate calculation of geometric dimensions of worm gearing system for students at secondary technical schools and universities as well as for employees working in the technical field with the following parameters: module, number of worm teeth, gear ratio, and coefficient of worm diameter. The paper contains a detailed description of the procedure of calculation of the worm gearing system and of a created program in the programming language of Java. The programming environment of NetBeans and the library of graphic components of Swing were used in the creation of the program. The final program version also contains the possibility of calculation of a module according to the standard and analysis of forces acting upon the worm wheel.