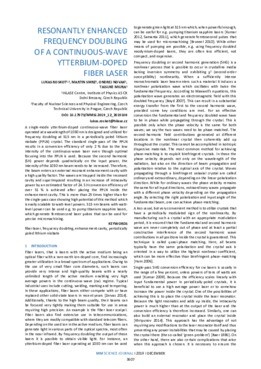 A single-mode ytterbium-doped continuous-wave fiber laser operated at a wavelength of 1030 nm is designed and utilized for frequency doubling at 515 nm in a periodically poled lithium niobate (PPLN) crystal. The standard single-pass of the PPLN results in a conversion efficiency of only 2 % due to the low intensity of the continuous-wave laser even though optimal focusing into the PPLN is used. Because the second harmonic (SH) power depends quadratically on the input power, the intensity of the 1030 nm beam needs to be increased. Therefore, the beam enters an external resonant enhancement cavity with a high quality factor. The waves are trapped inside the resonant cavity and superimposed resulting in an increase of intracavity power by an estimated factor of 24. SH conversion efficiency of over 51 % is achieved after placing the PPLN inside the enhancement cavity. This is more than 25 times higher than for the single-pass case showing high potential of this method which is easily scalable to watt-level powers. 515 nm beams with watt-level power can be used e.g. to pump titanium sapphire lasers, which generate femtosecond laser pulses that can be used for precise micromachining.