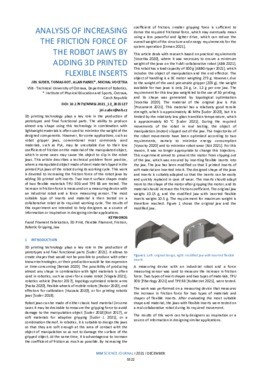 3D printing technology plays a key role in the production of prototypes and final functional parts. The ability to produce almost any shape using this technology in combination with lightweight materials is often used to minimise the weight of the designed components. However, for some applications, such as robot gripper jaws, conventional most commonly used materials, such as PLA, may be unsuitable due to their low coefficient of friction on the material of the manipulated object, which in some cases may cause the object to slip in the robot jaws. This article describes a technical problem from practice, where a manipulated object made of steel material slipped in the printed PLA jaws of the robot during its working cycle. This work is devoted to increasing the friction force of the robot jaws by adding 3D printed soft inserts. Two insert surface shapes made of two flexible materials TPU 30D and TPE 88 are tested. The increase in friction force is measured on a measuring device with an industrial robot and a force measuring sensor. The most suitable type of inserts and material is then tested on a collaborative robot at its required working cycle. The results of this experiment are intended to help designers as a source of information or inspiration in designing similar applications.