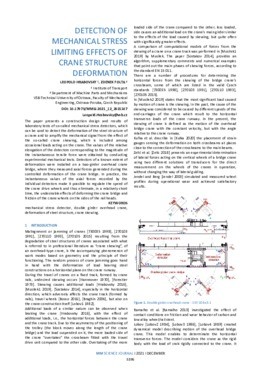 The paper presents a construction design and results of laboratory tests of so-called mechanical stress detectors, which can be used to detect the deformation of the steel structure of a crane and to amplify the mechanical signal from the effect of the so-called crane skewing, which is included among occasional loads acting on the crane. The values of the relative elongation of the detectors corresponding to the magnitude of the instantaneous tensile force were obtained by conducting experimental mechanical tests. Detectors of a known extent of deformation were installed on a two-girder overhead crane bridge, where they measured axial forces generated during the controlled deformation of the crane bridge. In practice, the instantaneous values of the axial forces recorded by the individual detectors make it possible to regulate the speed of the crane drive wheels and thus eliminate, in a relatively short time, the undesirable effects of deforming the crane bridge and friction of the crane wheels on the sides of the rail heads.