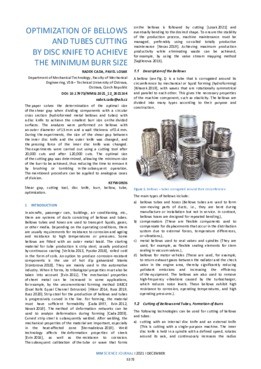 The paper solves the determination of the optimal size of the shear gap when dividing components with a circular cross section (hydroformed metal bellows and tubes) with a disc knife to achieve the smallest burr size on the divided surfaces. The analyzes were performed on bellows with an outer diameter of 15 mm and a wall thickness of 0.4 mm. During the experiments, the size of the shear gap between the inner disc knife and the outer knife was changed, and the pressing force of the inner disc knife was changed. The experiments were carried out using a cutting tool after 20,000 cuts and after 120,000 cuts. The optimal size of the cutting gap was determined, allowing the minimum size of the burr to be achieved, thus reducing the time to remove it by brushing or tumbling in the subsequent operation. The mentioned procedure can be applied to analogous cases of division.