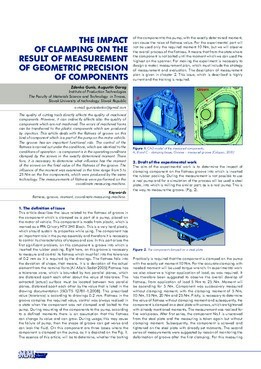 The quality of cutting tools directly affects the quality of machined components. However, it can indirectly affects also the quality of components which are not machined. The errors of machined forms can be transferred to the plastic components which are produced by injection. This article deals with the flatness of groove on this kind of component which is a part of the pump on the motor vehicle. The groove has an important functional role. The control of the flatness is carried out under the conditions, which are identical to the conditions of operation – a component is in the operating conditions clamped by the screws in the exactly determined moment. There fore, it is necessary to determine what influence has the moment of the screws on the final value of the flatness of the groove. The influence of the moment was examined in the time range from 5 to 25 Nm on the five components, which were produced by the same technology. The measurements of flatness were performed on the coordinate measuring machine.

DETERMINATION OF PARAMETER Ra FOR THE METHODS OF FINISHING MACHINING