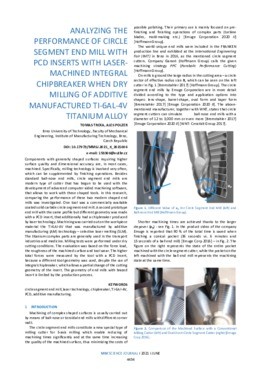 Components with generally shaped surfaces requiring higher surface quality and dimensional accuracy are, in most cases, machined. Specifically, milling technology is involved very often, which can be supplemented by finishing operations. Besides standard ball-nose end mills, circle segment end mills are modern type of cutter that has begun to be used with the development of advanced computer aided machining software, that allows to work with these shaped tools. In this research, comparing the performance of these two modern shaped end mills was investigated. One tool was a commercially available coated solid carbide circle segment end mill. A second prototype end mill with the same profile but different geometry was made with a PCD insert, that additionally had a chipbreaker produced by laser technology. Machining was carried out on the workpiece material the Ti-6Al-4V that was manufactured by additive manufacturing (AM) technology – selective laser melting (SLM). The titanium complex parts are generally used in the transport industries and medicine. Milling tests were performed under dry cutting conditions. The evaluation was based on the force load, the roughness of the machined surface and tool wear. The higher total forces were measured by the tool with a PCD insert, because a different tool geometry was used, despite the use of integral chipbreaker, which allows a partial change of the cutting geometry of the insert. The geometry of end mills with brazed insert is limited by the production process.