CONNECTING A VIRTUAL PRODUCTION AND A PLC 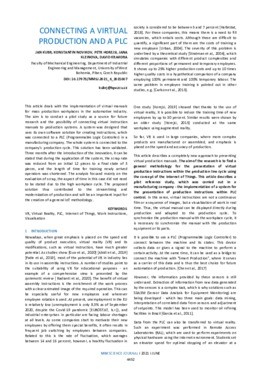 This article deals with the implementation of virtual manuals for mass production workplaces in the automotive industry. The aim is to conduct a pilot study as a source for future research and the possibility of connecting virtual instruction manuals to production systems. A system was designed that uses its own software solution for creating instructions, which was connected to a PLC (Programmable Logic Controller) in a manufacturing company. The whole system is connected to the company’s production cycle. This solution has been validated. Three months after the introduction of the innovation, it can be stated that during the application of the system, the scrap rate was reduced from an initial 12 pieces to a final state of 3 pieces, and the length of time for training newly arrived operators was shortened. The analysis focused mainly on the evaluation of scrap, the aspect of time in this case did not need to be stated due to the high workplace cycle. The proposed solution thus contributed to the streamlining and modernization of production and will be an important input for the creation of a general IoT methodology.