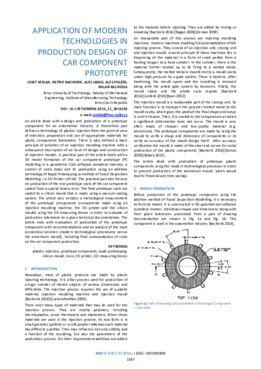 An article deals with a design and production of a prototype component for an automotive industry. A theoretical part defines a technology of plastics injection from the point of view of selection, preparation and use of appropriate materials for plastic components fabrication. There is also defined a basic principle of activities of an injection moulding machine with a subsequent description of an issue of design and construction of injection moulds. A practical part of the article deals with a 3D model formation of the car component prototype (PC modelling in a parametric CAD software Autodesk Inventor, a control of entry data) and its production using an additive technology of Rapid Prototyping (a method of Fused Deposition Modelling – a 3D Printer uPrint). The practical part also focuses on production of the real prototype casts of the car component casted from a special binary resin. The final prototype casts are casted to a silicon mould that is made using a vacuum casting system. The article also includes a metrological measurement of the prototype components (components made using an injection moulding machine, the 3D printer and the silicon mould) using the 3D measuring device in order to evaluate of production tolerances to a given technical documentation. The article ends with evaluation of production of the prototype component with recommendations and an analysis of the most economical solution (modern technological procedures versus the aluminium mould), including final summarization of costs on the car component production.