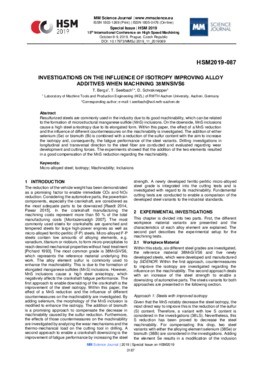 Resulfurized steels are commonly used in the industry due to its good machinability, which can be related to the formation of microstructural manganese sulfide (MnS) inclusions. On the downside, MnS inclusions cause a high steel anisotropy due to its elongated form. Within this paper, the effect of a MnS reduction and the influence of different countermeasures on the machinability is investigated. The addition of either selenium (Se) or bismuth (Bi) is combined with a reduction of the sulfur content with the aim to increase the isotropy and, consequently, the fatigue performance of the steel variants. Drilling investigations in longitudinal and transversal direction to the steel fiber are conducted and evaluated regarding wear development and cutting forces. The experiments showed that the addition of the two elements resulted in a good compensation of the MnS reduction regarding the machinability.

INVESTIGATION OF THE COOLANT FLUID FLOW DISTRIBUTION IN THE GRINDING GAP