THE BEHAVIOUR OF CROSS-LINKING FILLED PBT MEASURED BY NANO-HARDNESS 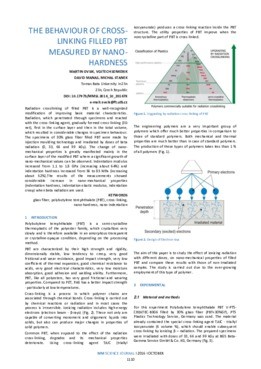 Radiation crosslinking of filled PBT is a well-recognized modification of improving basic material characteristics. Radiation, which penetrated through specimens and reacted with the cross-linking agent, gradually formed cross-linking (3D net), first in the surface layer and then in the total volume, which resulted in considerable changes in specimen behaviour. The specimens of 30% glass fiber filled PBT were made by injection moulding technology and irradiated by doses of beta radiation (0, 33, 66 and 99 kGy). The change of nano-mechanical properties is greatly manifested mainly in the surface layer of the modified PBT where a significant growth of nano-mechanical values can be observed. Indentation modulus increased from 1.1 to 1.8 GPa (increasing about 64%) and indentation hardness increased from 56 to 85 MPa (increasing about 52%).The results of the measurements showed considerable increase in nano-mechanical properties (indentation hardness, indentation elastic modulus, indentation creep) when beta radiation are used.

LOGISTICS OF EXPERIMENTING WITH STRENGTHENING THE SURFACE LAYERS OF MACHINE PARTS