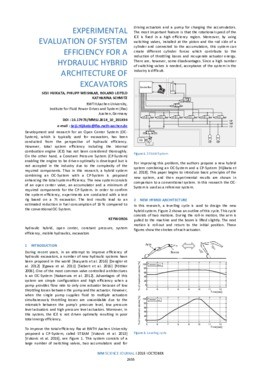 Development and research for an Open Center System (OC-System), which is typically used for excavators, has been conducted from the perspective of hydraulic efficiency. However, total system efficiency including the internal combustion engine (ICE) has not been considered thoroughly. On the other hand, a Constant Pressure System (CP-System) enabling the engine to be driven optimally is developed but is not accepted in the industry due to the complexity of the required components. Thus in this research, a hybrid system combining an OC-System with a CP-System is proposed enhancing the total system efficiency. The new system consists of an open center valve, an accumulator and a minimum of required components for the CP-System. In order to confirm the system efficiency, experiments are conducted with a test rig based on a 7t excavator. The test results lead to an estimated reduction in fuel consumption of 16 % compared to the conventional OC-System.