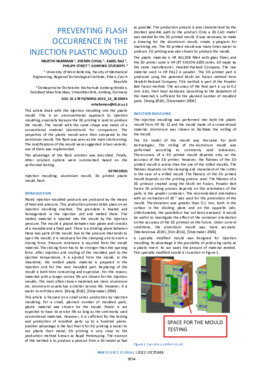 This article deals with the injection moulding into the plastic mould. This is an unconventional approach to injection moulding, especially because the 3D printing is used to produce the mould. The mould with the same shape was made of a conventional material (aluminium) for comparison. The properties of the plastic mould were then compared to the aluminium mould. The flash was seen as the main shortcoming. The modifications of the mould were suggested in two variants, one of them was implemented. The advantage of the flash solution was described. Finally, other solution options were summarized based on the performed testing.

METHOD FOR PRECISE AND REPEATABLE MACHINE TOOL ADJUSTMENT ON FOUNDATION