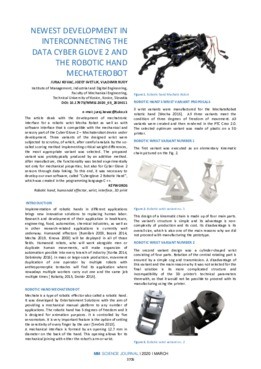 The article deals with the development of mechatronic interface for a robotic wrist Mecha Robot as well as with software interface that is compatible with the mechanical and sensory part of the Cyber Glove 2 – Mechaterobot device under development. Three variants of the designed wrist were subjected to scrutiny, of which, after careful analysis by the so-called scoring method implementing critical weight differences, the most appropriate variant was selected. The proposed variant was prototypically produced by an additive method. After manufacture, the functionality was tested experimentally not only for mechanical properties, but also for Cyber Glove 2 sensors through data linking. To this end, it was necessary to develop our own software, called "Cyberglove 2 Robotic Hand", which was created in the programming language C ++.