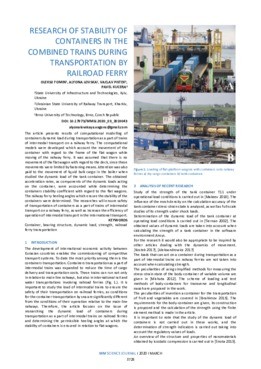 The article presents results of computational modelling of containers dynamic load during transportation as a part of trains of intermodal transport on a railway ferry. The computational models were developed which account the movement of the container with regard to the frame of the flat wagon while moving of the railway ferry. It was assumed that there is no movement of the flat wagon with regard to the deck, since these movements were limited by fastening means. Attention was also paid to the movement of liquid bulk cargo in the boiler when studied the dynamic load of the tank container. The obtained acceleration rates, as components of the dynamic loads acting on the container, were accounted while determining the containers stability coefficient with regard to the flat wagons. The railway ferry heeling angles which ensure the stability of the containers were determined. The researches will ensure safety of transportation of containers as a part of trains of intermodal transport on a railway ferry, as well as increase the efficiency of operation of intermodal transport in the international transport.