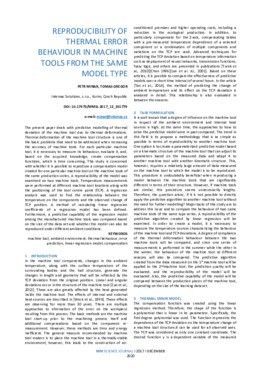 The present paper deals with predictive modelling of thermal deviation of the machine tool due to thermal deformations. Thermal deformation of the machine tool structure is one of the basic problems that need to be addressed when increasing the accuracy of machine tools. For each particular machine tool, it is necessary to measure its behaviour, evaluate it, and, based on the acquired knowledge, create compensation functions, which is time consuming. This study is concerned with whether it is possible to reproduce a compensation model created for one particular machine tool on the machine tools of the same production series. A reproducibility of the model was examined on two machine tools. Temperature measurements were performed at different machine tool locations along with the positioning of the tool centre point (TCP). A regression analysis was used to find the relationship between the temperature on the components and the observed change of TCP position. A method of calculating linear regression coefficients of a regression model has been defined. Furthermore, a predictive capability of the regression model among the manufactured machine tools was compared based on the size of the data set and whether the model can also be reproduced under different ambient conditions.