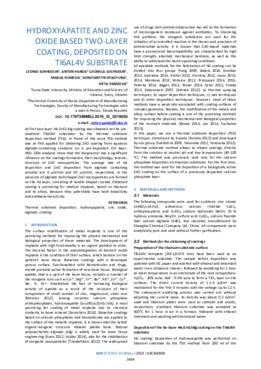 At first two-layer, HA-ZnO/Alg coating was obtained on the pre-anodized Ti6Al4V substrates by the thermal substrate deposition method (TSD). In the frame of this work, TSD method was at first applied for obtaining ZnO coating from aqueous alginate-containing solutions on a pre-deposited OH layer. XRD, SEM analyzes show that the biopolymer has a significant influence on the coatings formation, their morphology, texture, structure of ZnO nanoparticles. The average rate of HA deposition and ZnO deposition from alginate containing solution are 4 μm/min and 30 μm/min, respectively. In the presence of alginate boll-shaped ZnO microparticles are formed on the HA layer, consisting of needle-shaped crystals. The obtained coating is promising for medical implants, based on titanium and its alloys, because they potentially have both bioactivity and antibacterial activity.