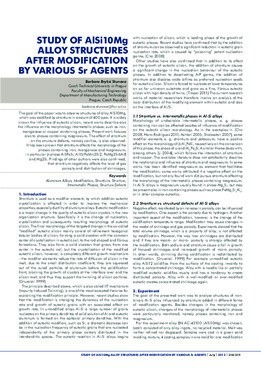 The goal of the paper was to observe structures of alloy AlSi10Mg, which was modified by strontium in amount of 400 ppm. It is widely known the influence of eutectic silicon, recent works describe also the influence on the morphology intermetallic phases, such as iron, manganese or copper containing phases. Present work focuses also to phases containing magnesium. The effect of strontium on the structure defects, namely cavities, is also observed. It has been proven that strontium affects the morphology of the phases containing iron, manganese and magnesium, in particular β-phase Al5FeSi, Al15(FeMn)3Si2, FeMg3Si6Al8 and Mg2Si. Findings of other authors were also confirmed, that strontium negatively affects the level of gas porosity and distribution of shrinkages.

IMPACT OF WATER REMAINS ON A HOT ROLLED PLATE AFTER COOLING

THE INFLUENCE OF HOLDING PRESSURE ON POWDER DISTRIBUTION IN PIM TECHNOLOGY