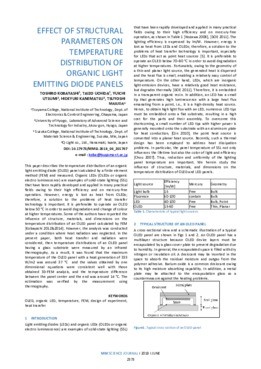 This paper describes the temperature distribution of an organic light emitting diode (OLED) panel calculated by a finite element method (FEM) and measured. Organic LEDs (OLEDs or organic electro luminescence) are examples of solid-state lighting (SSL) that have been rapidly developed and applied in many practical fields owing to their high efficiency and on mercury-free operation. However, energy is lost as heat from OLEDs; therefore, a solution to the problems of heat transfer technology is important. It is preferable to operate an OLED below 50 °C in order to avoid degradation and change of colour at higher temperatures. Some of the authors have reported the influence of structure, materials, and dimensions on the temperature distribution of an OLED panel calculated by FEM [Kobayashi 2012&2014]. However, the analysis was conducted under a condition where heat radiation was neglected. In the present paper, both heat transfer and radiation were considered, then temperature distributions of an OLED panel having a glass substrate were measured by an infrared thermography. As a result, it was found that the maximum temperature of the OLED panel with a heat generation of 333 W/m2 was around 37 °C and the values obtained by one dimensional equations were consistent well with those obtained 3D-FEM analysis, and the temperature difference between the panel center and the end was around 14 °C. The estimation was verified by the measurement using thermography.