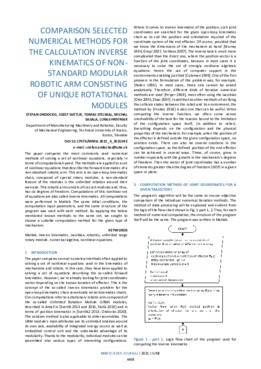 The paper compares the most commonly used numerical methods of solving a set of nonlinear equations, especially in terms of computational speed. The methods are applied to a set of nonlinear equations that describe the forward kinematics of a non-standard robotic arm. This arm is an open-loop kinematics chain, composed of special rotary modules. A non-standard feature of the modules is the unlimited rotation around their own axis. This robotic arm consists of six such modules and, thus, has six degrees of freedom. Computations of this nonlinear set of equations are also called inverse kinematics. All computations were performed in Matlab. The same initial conditions, the computation input parameters, and the same structure of the program was used with each method. By applying the below mentioned known methods to the same set, we sought to choose a suitable computation method for the given type of mechanism.