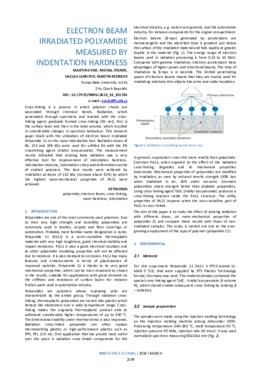 Cross-linking is a process in which polymer chains are associated through chemical bonds. Radiation, which penetrated through specimens and reacted with the cross-linking agent, gradually formed cross-linking (3D net), first in the surface layer and then in the total volume, which resulted in considerable changes in specimen behaviour. This research paper deals with the utilization of electron beam irradiated Polyamide 11 on the nano-indentation test. Radiation doses of 66, 132 and 198 kGy were used for unfilled PA with the 5% crosslinking agent (triallyl isocyanurate). The measurement results indicated that ionizing beta radiation was a very effective tool for improvement of indentation hardness, indentation modulus, indentation creep and deformation works of studied polymers. The best results were achieved by irradiation at doses of 132 kGy (increase about 31%) by which the highest nano-mechanical properties of PA11 were achieved.