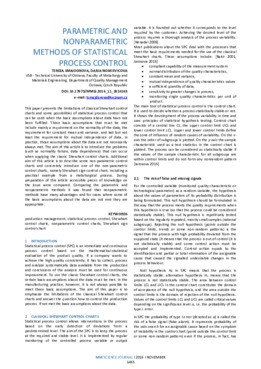 This paper presents the limitations of classicalShewhart control charts and some possibilities of statistical process control that can be used when the basic assumptions about data have not been fulfilled. These basic assumptions that must be met include mainly a requirement on the normality of the data, the requirement for constant mean and variance, and last but not least the requirement for mutual independence of data. In practice, those assumptions about the data are not necessarily always met. The aim of this article is to introduce the problems (such as normality failure, data dependence) that can occurwhen applying the classic Shewhart control charts. Additional aim of this article is to describe some non-parametric control charts and concretely introduce one of the non-parametric control charts, namely Shewhart sign control chart, including a practical example from a metallurgical process. During preparation of this article accessible pieces of knowledge on the issue were compared. Comparing the parametric and nonparametric methods it was found that nonparametric methods have many advantages and for cases where some of the basic assumptions about the data are not met they are appropriate.