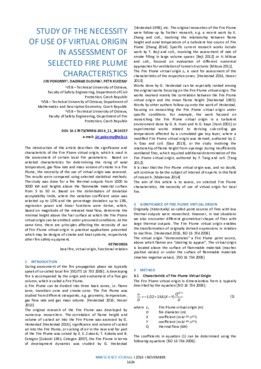 The introduction of this article describes the significance and characteristic of the Fire Plume virtual origin, which is used in the assessment of certain local fire parameters. Based on selected characteristics for determining the rising of axial temperature, gas flow rate and mass volume of smoke in a Fire Plume, the necessity of the use of virtual origin was assessed. The results were compared using selected statistical methods. The study was done for a fire thermal outputs from 1000 to 5000 kW and heights above the flammable material surface from 5 to 50 m. Based on the delimitation of deviation acceptability limits, where the variation coefficient value was selected up to 10% and the percentage deviation up to 15%, regression power and linear functions were derive, which, based on magnitude of the released heat flow, determine the minimal height above the fuel surface at which the Fire Plume virtual origin can be omitted under presumed conditions. At the same time, there are principles affecting the necessity of use of Fire Plume virtual origin in practical applications presented which may be designs of smoke and heat systems, respectively other fire safety equipment.