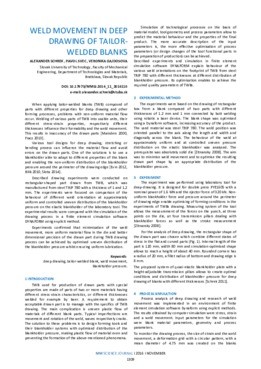 When applying tailor-welded blanks (TWB) composed of parts with different properties for deep drawing and other forming processes, problems with non-uniform material flow occur. Welding of various parts of TWB into usable units, their different stress-strain properties, respectively different thicknesses influence their formability and the weld movement. This results in inaccuracy of the drawn parts [Mainders 2000, Fracz 2013]. Various tool designs for deep drawing, stretching or bending process can influence the material flow and avoid errors on the drawn parts. One of the solutions is to use a blankholder able to adapt to different properties of the blank and enabling the non-uniform distribution of the blankholder pressure around the perimeter of the drawing edge [Evin 2012, Bílik 2010, Slota 2014]. Described drawing experiments were conducted on rectangular-shaped part drawn from TWB, which was manufactured from steel TRIP 780 with a thickness of 1 and 1.2 mm. The experiments were focused on comparison of the behaviour of different weld orientation at approximately uniform and controlled uneven distribution of the blankholder pressure on the elastic blankholder of the laboratory tool. The experimental results were compared with the simulation of the drawing process in a finite element simulation software DYNAFORM using explicit method. Experiments confirmed that minimisation of the weld movement, more uniform material flow in the die and better dimensional precision of the drawn part during TWB drawing process can be achieved by optimised uneven distribution of the blankholder pressure whilst ensuring uniform lubrication.