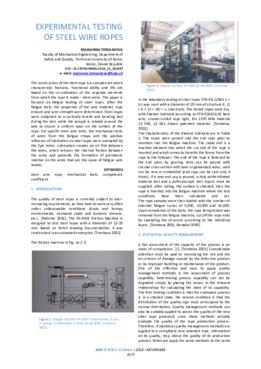 The construction of the steel rope is a complex set which characteristic features, functional ability and life are based on the co-ordination of the separate elements from which the rope is made - steel wires. The paper is focused on fatigue testing of steel ropes. After the fatigue tests, the properties of the wire material, rope erasure and wire strength were determined. Steel ropes were subjected to a cyclically tensile and bending test during the test, while the sample is rotated around the axle to ensure a uniform wear on the surface of the rope. For specific steel wire tests, the mechanical tests of wires from the fatigue straps and the positive influence of lubrication on steel ropes were evaluated by the Cpk Index. Lubrication creates an oil film between the wires, which reduces the internal friction between the wires and prevents the formation of premature notches on the wires that are the cause of fatigue wire breaks.

USAGE OF TOPOLOGICAL OPTIMIZATION IN DESIGN OF MECHANICAL FORGING PRESSES