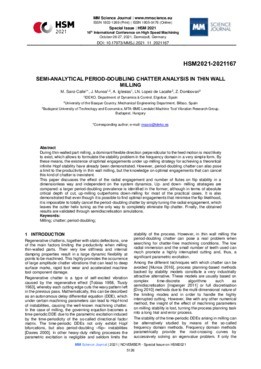 During thin-walled part milling, a dominant flexible direction perpendicular to the feed motion is most likely to exist, which allows to formulate the stability problem in the frequency domain in a very simple form. By these means, the existence of optimal engagements under up-milling strategy for achieving a theoretical infinite Hopf stability have already been demonstrated. However, period-doubling chatter can also pose a limit to the productivity in thin wall milling, but the knowledge on optimal engagements that can cancel this kind of chatter is inexistent. This paper discusses the effect of the radial engagement and number of flutes on flip stability in a dimensionless way and independent on the system dynamics. Up- and down- milling strategies are compared: a larger period-doubling prevalence is identified in the former, although in terms of absolute critical depth of cut, up-milling outperforms down-milling for most of the practical cases. It is also demonstrated that even though it is possible to find optimal engagements that minimise the flip likelihood, it is impossible to totally cancel the period-doubling chatter by simply tuning the radial engagement, which leaves the cutter helix tuning as the only way to completely eliminate flip chatter. Finally, the obtained results are validated through semidiscretisation simulations.