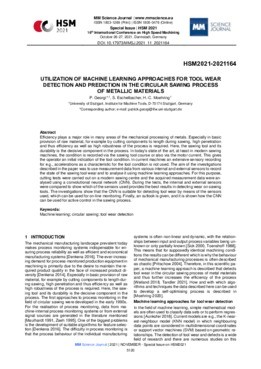 Efficiency plays a major role in many areas of the mechanical processing of metals. Especially in basic provision of raw material, for example by cutting components to length during sawing, high penetration and thus efficiency as well as high robustness of the process is required. Here, the saw-ing tool and its durability is the decisive component in the process. In today's state of the art, at least in modern sawing machines, the condition is recorded via the sawing tool course or also via the motor current. This gives the operator an initial indication of the tool condition. In current machines an exten-sive sensory recording for e.g., accelerations as a characteristic for the tool condition is not used. The aim of the investigations described in the paper was to use measurement data from various internal and external sensors to record the state of the sawing tool wear and to analyse it using machine learning approaches. For this purpose, cutting tests were carried out on a modern sawing centre and the acquired measurement data were analysed using a convolutional neural network (CNN). During the tests, the internal and external sensors were compared to show which of the sensors used pro-vides the best results in detecting wear on sawing tools. The investigations show that the CNN is suit-able for detecting tool wear by means of the sensors used, which can be used for on-line monitoring. Finally, an outlook is given, and it is shown how the CNN can be used for active control in the sawing process.