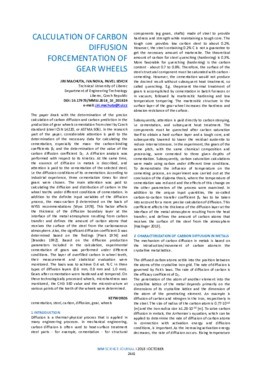 The paper deals with the determination of the precise calculation of carbon diffusion and carbon prediction in the production of gear wheels cementation from steel by Czech standard (steel CSN 14220, or ASTMA 506). In the research part of the paper, considerable attention is paid to the determination of the necessary data for calculating the cementation, especially the mass- the carbon-binding coefficients ßC and the determination of the value of the carbon diffusion coefficient DC. A diffusion analysis was performed with respect to its kinetics. At the same time, the essence of diffusion in metals is described, and attention is paid to the cementation of the selected steel, i.e the diffusion conditions of its cementation. According to industrial experience, three cementation times for steel gears were chosen. The main attention was paid to calculating the diffusion and distribution of carbon in the wheel teeths under different conditions of cementation. In addition to the definite input variables of the diffusion process, the mass-carbon ß determined on the basis of WYSS recommendations [Wyss 1978]. This factor affects the thickness of the diffusion boundary layer at the interface of the metal atmosphere resulting from carbon transfer and defines the amount of carbon atoms that receives the surface of the steel from the carbonaceous atmosphere. Also, the significant diffusion coefficient D was determined based on the findings [Pisek 1974] and [Brandes 1992]. Based on the diffusion production parameters included in the calculation, experimental cementation of gears was performed under different conditions. The layer of overfilled carbon in wheel teeth, their measurement and statistical evaluation were monitored. The basis was to achieve 0.4 wt. % C in three types of diffusion layers (0.6 mm, 0.8 mm and 1.0 mm). Gears after cementation were hardened and tempered. On these technologically processed wheels, microhardness was monitored, the CHD 550 value and the microstructure at various points of the teeth of the wheels were determined.