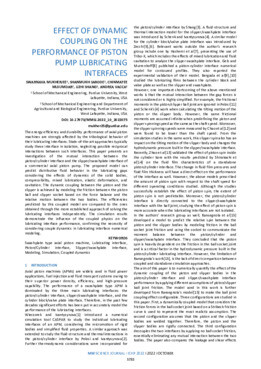 The energy efficiency and durability performance of axial piston machines are strongly affected by the tribological behavior of their lubricating interfaces. State-of-the-art approaches typically study these interface in isolation, neglecting possible reciprocal interactions between such interfaces. This paper presents an investigation of the mutual interaction between the piston/cylinder interface and the slipper/swashplate interface of a commercial axial piston pump. The proposed model can predict distributive fluid behavior in the lubricating gaps considering the effects of dynamics of the solid bodies, compressibility, mixed lubrication, elastic deformation, and cavitation. The dynamic coupling between the piston and the slipper is achieved by modeling the friction between the piston ball and slipper socket based on the force balance and the relative motion between the two bodies. The efficiencies predicted by this coupled model are compared to the ones obtained through the more established approach of solving the lubricating interfaces independently. The simulation results demonstrate the influence of the coupled physics on the lubricating interface performance, confirming the necessity of considering couple dynamics in lubricating interface numerical modeling.